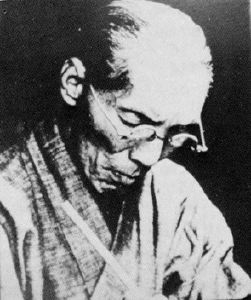 Kanjiro Kawai
Modern Japanese Ceramic
Japanese, (1889–1966)
Born in Yasuki, Japan, Kanjiro Kawai began making ceramics in middle school. In 1911 he attended an exhibition of works by British potter Bernard Leach, and was so impressed that he purchased a piece and introduced himself to the artist. Two years later he enrolled as a ceramics student at the Tokyo Technical College, where Shoji Hamada was a fellow student. Upon graduating in 1916, Kanjiro and Hamada were hired as engineers at the Kyoto Ceramics Research Institute. In 1920 Kanjiro married, built his own kiln, and began building an impressive body of work that was already being widely exhibited. He was one of the founders of the Japan Folk Art Association and the Folk Art Museum, and began collecting Chinese, Korean, and Japanese art. Kanjiroâs own work flourished as he moved from functional and non-functional ceramics vessels to wood sculpture and writing. He was nominated to become a National Living Treasure in Japan, but in the spirit of anonymity he declined the honor.

Your current search criteria is: Artist is "Kanjiro Kawai".