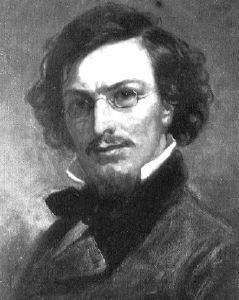 George Inness
19th century American Impressionism Painter
American, (1825–1894)
Inness was an intensely religious man, and was a student of Swedenborgian philosophy during the last decades of his life. Though it is not entirely known how Swendenborg's philosophy influenced Inness's work, it is evident that during this period his paintings reveal a more poetic interpretation of reality.

Inness's work is an early example of Tonalism, the late 19th century American style characterized by diffused light, subtle colorization, and a nostalgic mood of reverie. As in Oriental art, the human figure is never the object of
the scene, but simply a bystander, lost in the vast landscape.

The years between 1870 and1884 represent the richest and most active period in George Inness's art. During this time Inness had recently returned from a five year visit to Europe. It was during this period that he began to use a richer, deeper palette, and looser brushwork.

In the Catskills EV21

On the Pequonic River YO27

Your current search criteria is: Artist is "George Inness".