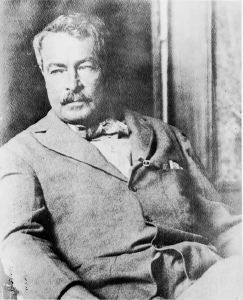 Frederick Childe Hassam
Late 19th / Early 20th c. Impressionist, The Ten Painter, printmaker
American, (1859–1935)
b. Oct. 12, 1859 in Dorchester (near Boston), MA; d. Aug. 27, 1935 in East Hampton, NY. Study: Boston; Paris, with Boulanger and Lefebvre at AcadÃ©mie Julien. He trained first as a draftsman, moving to painting during the 1880s in Boston. Impressionistic style cityscapes and landscapes. Founding member of "The Ten" group in 1898. Painted in oil, pastel, and watercolor in the style of Monet and Whister. Won 35 major prizes during his very successful career. Began serious work in etching in 1915, and did primarily lithography from 1917-18. His style was greatly impacted by a visit to France in 1886-89, during which he worked for a short time at the AcadÃ©mie Julian. When he returned to America he proclaimed himself an Impressionist. The 1880's and 1890's were a
period of great acclaim and success for Hassam. In 1897 Hassam returned to France.

Street in Pont-Aven, Brittany YO19

The Model Disrobing YO21

Your current search criteria is: Artist is "Frederick Childe Hassam".