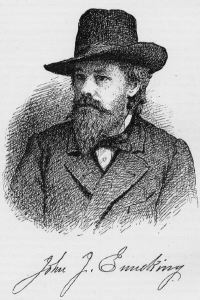 John Joseph Enneking
Late 19th century Early Modern Painter
American, (1841–1916)
Enneking was born in Minister, Ohio, and began his career as a landscape painter in Boston, in the manner of the Hudson River school. He went to Europe in 1872, and travelled Munich and Paris. While in Europe he was influenced by the Barbizon School (he worked in Paris for a time under Leon Bonnat and Charles Daubigny) and the French Impressionists. He returned to New England in 1876, and lived most of the the rest of his life between Massachusetts and a summer home in Maine. He painted many landscapes of the White Mountains. His works were of two different types - brightly colored with an all-over effect of dappled sunlight (luminism and tonalism), and more muted, serene works in the manner of George Inness or George Fuller.

Your current search criteria is: Artist is "John Joseph Enneking".