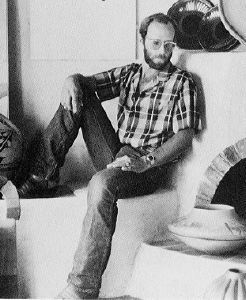 Rick Dillingham
20 century Contemporary Ceramist
American, (1952–1993)
Rick Dillingham was born in Lake Forest, Illinois in 1952. He received his B. F. A. at the Univesity of New Mexico in Albuquerque in 1974 and his M. F. A. at the Claremont Graduate School in 1976. He worked mainly with vessels, "fractured" globes, bowls and saucers of an almost oriental nature, and with "gas cans" which were sculptural forms cast in clay and bronze. He won NEA awards in 1982 and 1977. He was an artist, scholar, curator, and gallery owner, and lived and worked in Santa Fe, New Mexico until his death in 1993.

Dillingham is perhaps best known for his deliberately broken, then glued, grouted and decorated slab and coil-built vessels. His pieces can be seen as an outgrowth of his museum restoration work. Dillingham fractured the raku, dung-fired or bisqued ware by dropping or tapping and pulling the form apart. Gold leaf or enamel paint was often applied in geometric patterns on the fragments prior to reassembly, lending a patchwork appearance to the finished form.

Your current search criteria is: Artist is "Rick Dillingham".