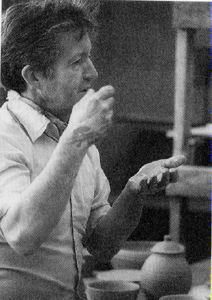 Seth Cardew
20th century Contemporary Ceramist
English, (1934–2016)
Born in York in Great Britian in 1934 into a family of ceramists. He is the son of Michael Cardew, and the father of the ceramist Ara Cardew. He ran the family studio, Wenford Bridge, with his son Ara after his father's death.

Excerpts rom his obituary in the Guardian:

Seth Cardew, who has died aged 81, was a sculptor and potter who from the mid-1970s maintained a family tradition at Wenford Bridge in Cornwall. His magnificent platters, bowls and large jars had grace and balance, and he could paint freehand with breathtaking fluency on pots, developing and enriching designs pioneered by his father.

[In the 1950s], following his motherâs advice, he went to Chelsea School of Art in Manresa Road, where he was taught by John Berger, Frederick Brill, Daphne Chart, Brian Robb and Willi Soukop.

After national service in the RAF in south-east Asia, Cardew attended Camberwell School of Arts and Crafts, where he was taught by Karel Vogel, head of the school of sculpture. Vogelâs expressive figurative sculpture had a powerful influence. There, too, Cardew met his first wife, Jutta Zemke, a model.

For several years he earned a living as a sculptor and model-maker at Pinewood Studios and Shepperton, working on the films Satan Never Sleeps (1962), Cleopatra (1963) and Beckett (1964). In 1974, after 10 years of a hand-to-mouth existence and the birth of three children, Aeschylus, Ara and Gaea, Cardew was persuaded by Jutta to join his father at Wenford Bridge.

These were productive if difficult years in which he dealt with the day-to-day running of the pottery, helped to teach Michaelâs students, orchestrated the communal existence at Wenford, taught pottery at Fellover, a local experimental school, participated creatively in his fatherâs rich musical life and, to his fatherâs dismay, found solace in various forms of fundamentalist Christianity. By 1981, Ara had joined the pottery team.

After Michaelâs death in 1983, Cardew carried on running Wenford Bridge seamlessly, to the extent that he continued his fatherâs journal where Michael had left off.

Rather like Leachâs son David, Cardew lived part of his life in his fatherâs shadow, fulfilling a parental dream of a traditional workshop, with skills handed down over generations. He was kinder and gentler than his father, charming, with ageless good looks, his dress slightly formal, even if his tweed coat tended to be torn and dusty with clay. Many gifted students passed through Wenford Bridge, but arguably it was Cardew who made work that came the closest to his fatherâs unique sensibility.

Your current search criteria is: Artist is "Seth Cardew".