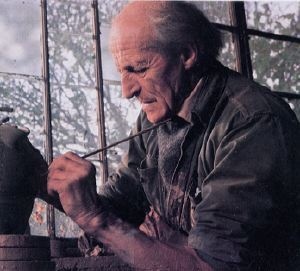 Michael Cardew
20th century Modern Ceramist
English, (active 1900–1983)
Michael Cardew first began to make pots in 1921. His first instructor was Willie Holland, who had entered the family pottery at Fremington in North Devon at the age of 13. Cardew was Bernard Leach's first student at St. Ives. There he practiced European and English folk pottery traditions with symmetrical, utilitarian shapes and simple linear animal and plant motifs. Though he was not influenced by the Asian aesthetic, which was popular during his time, he established potteries in Nigeria in the 1940's and 1950's, and his work, as a result, developed influence from African design. Both his son, Seth, and grandson, Ara, went on to be ceramists. Michael considered this a happy accident and an unusual one in a time when tradition and family potteries were becoming a thing of the past. Michael Cardew ran Wenford Bridge Pottery in Cornwall where he imbued students such as Ray Finch, Clive Bowen and Sidney Tustin with his example and philosophy.

Your current search criteria is: Artist is "Michael Cardew".