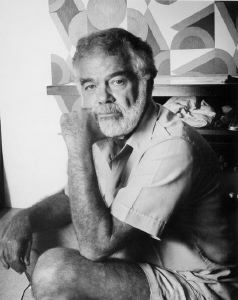 Karl Benjamin
20th century Painter
American, b. 1925
Born in Chicago, Illinois. Attended Northwestern University; in the Navy during World War II. Moved to California in 1946. Received his B.A. from the University of the Redlands (Liberal Studies). Became an elementary school teacher in 1949, and began to paint in his spare time. In the 1950s he lived in Claremont, California, teaching and painting landscapes, still lifes, and figures in an Abstract Expressionist style. His style showed a cubist influence around 1954. From the late 1950s on his style is considered "hard-edge" abstraction, with an emphasis on color and geometric forms. His subjects after this period were often architectural and floral themes. In 1977 he retured from teaching elementary school and became a Professor of Art at Pomona College and the Claremont Graduate School. Benjamin never did consider himself a "career artist".

Your current search criteria is: Artist is "Karl Benjamin".