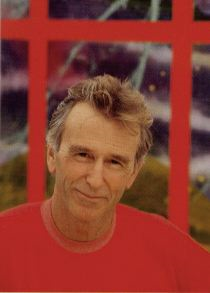 Billy Al Bengston
20th century Modern Painter, Ceramist
American, b. 1934
Billy Al Bengston was born in 1934 in Dodge City, Kansas. He moved to California at an early age, and attended Manual Arts High School. There he first became involved in ceramics. He studied further at Los Angeles City College from 1953-56 and at the Otis Art Institute from 1956-57. He was part of the group that formed around Peter Voulkos there. He worked as a technical assistant at Otis, and signed his works "Moonstone" during this period. After leaving Otis he turned from pottery to painting. He returned to clay work in 1975, and was invited to participate in "New Works in Clay by Contemporary Painter and Sculptors" at the Everson Museum of Art. His work was influenced by raku and oribe Japanese ceramic styles, and he used an iris motif of sprayed glazes over a template throughout his ceramic work.

Your current search criteria is: Artist is "Billy Al Bengston".