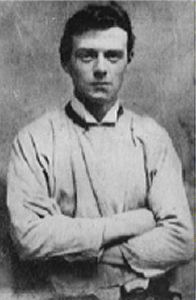 Arthur Atkins
19th c Painter
American, (1873–1899)
Arthur Atkins was a self-taught painter who created rich landscapes of California. His was a short but prolific career in art. Atkins was born in Queens Ferry, England, in 1873, but came to America in his youth. He settled in San Francisco and briefly attended the School of Design. He had his first exhibition in 1896 and in the same year showed at the Mark Hopkins Institute of Art and at his own studio on Jackson Street. He traveled to Europe on the earnings he made from sales of his art, and he spent time painting in Wales and France. Atkins returned to California in 1898 and died in the early part of 1899 in the city of Piedmont, California. Much of his work was destroyed in a studio fire in the 1890s. As a result of his short life and lack of available examples of his work, his art has become quite rare.

Your current search criteria is: Artist is "Arthur Atkins".