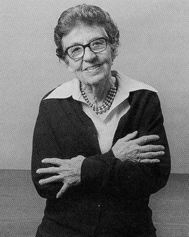 Laura Andreson
20th c Ceramist
American, (1902–8/16/99)
Laura Andreson received her B.A. at the University of California, Los Angeles, in 1932, and her M.A. at Columbia University, New York, in 1937. She taught at the University of California, Los Angeles from 1933 to 1970. In 1970 she retired from academics, enabling her to devote more time to her own artistic work. Her earlier works were primarily hand-built earthenware vessels, while her later works turned to stoneware and wheel-thrown porcelain pieces. Her career was one of exploration and discovery, as little technical information on clays and glazes existed in the United States when she began working in the 1930's. The role she played in the rise of importance of ceramics in the West was crucial; she introduced one of the pioneering pottery courses on the West coast, taught over 5,000 students during her time at UCLA, and played a crucial role in the innovations that occured at the Otis School in the late fifties.

Your current search criteria is: Artist is "Laura Andreson".