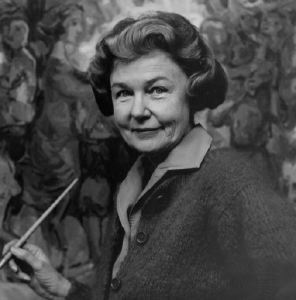 Jean Goodwin Ames
20th c. Modern Painter, Muralist, Sculptor, Ceramicist, and Mosaicist
American, (1903–1986)
Californian painter, muralist, sculptor, ceramicist, and mosaicist, born in 1903 near Santa Ana, California, died in 1986. First studied art in 1926 at the Art Institute of Chicago. Received her bachelors from UCLA in 1931. Taught art from 1932-33 at Santa Ana High School and from 1933-36 at Citrus High School and Junior College. In 1937 she attended the M.F.A. program at USC. It was at USC that she developed an interest in mural decoration, and met Arthur Ames, her husband and fellow artist and collaborator. They joined the WPA together in 1937 and became leaders in the revival of decorative mural techniques, and popularized the use of mosaics. They married in 1940, and soon after Jean joined the faculty of Scripps and the Claremont Graduate School. The couple became interested in enameling after they saw an exhibition by Karl Drerup in 1940, and began working in the medium in 1947. Jean's works in enamel use the richness of the medium to depict fanciful and mythological creatures in jewel-like tone and depth. During the fifties Ames completed many decorative architectural commissions for churches and buildings in the Los Angeles area. During the sixties she worked in stained glass and tapestries, in addition to the enamels. She taught Karl Benjamin, Paul Darrow, Douglas McClellan, and Jack Zajac while at Scripps and CGU.
R. Dunitz, Street Gallery, 1993; "Art at Scripps, the Early Year" exhibition catalog, Lang Gallery, Scripps College, 1988.

The Swallows of San Juan Capistrano 88.1.1b

Your current search criteria is: Artist is "Jean Goodwin Ames".