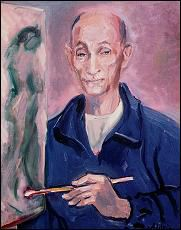 Anders Aldrin
20th century Modern Printmaker
(1889–1970)
Anders G. Aldrin was born in Stjernsfors, Varmland, Sweden on August 29, 1889. He was aware of his artistic abilities and aspirations at a young age, but he found little encouragement from his family nor time to pursue such yearnings. Economics forced him to take a variety of menial jobs during his youth and early adulthood. Immigrating to the United States in 1911, he first went to Chicago before finally settling in Minneapolis, an area with a large number of Scandinavian immigrants. There me met and later married Mabel Esther Lindberg, daughter of a Swedish Baptist minister. Drafted for service in World War I, he was sent to France where he served for one year. In the military he contracted tuberculosis which led to he being sent to recuperate at the Veteran's Administration Hospital in Prescott, Arizona, where he started to paint. He remained there with his family until the summer of 1923 at which time he moved to Los Angeles.
Â
After his move to California, a modest army pension allowed him to support his small family while attending Otis Art Institute for four years (1923-1927). He was awarded a full scholarship for his last year, which was announced in the Department of Fine and Applied Arts. The announcement described him as "one of the best trained and most promising studentsâ¦.Mr. Aldrin's splendid unconditioned attitude will continue to achieve, both physically and spiritually." Also noted were the difficulties that Aldrin had encountered as an older student whose heath was not optimal (due to the tuberculosis), and who already had a family to support.
Â
After finishing at Otis, Aldrin moved to Santa Barbara where he attended the Santa Barbara School of Arts on a full Scholarship from 1927 to 1930. He further supplemented his education with six months at the California School of Fine Arts in San Francisco (Summer and Fall of 1929). He returned to Los Angeles in 1930.

He began exhibiting locally and was accorded a one-man show at the Los Angeles Museum in 1935. Jake Zeitlin exhibited his work in February 1940, including prints, pastels, and oils. Reviewing the exhibition, Los Angeles Times art critic Arthur Millier had high praise for the artist, "a quiet painter who runs in no packâ¦.To him the world is dominantly red and green, but how he makes these colors sing!" Throughout his career Aldrin was also a participant in many group exhibitions in California, especially with the California Water Color Society in which he was an occasional exhibitor beginning in 1927 and continuing through the 1960s.
Â
In 1940 his painting Echo Park became the subject of Arthur Millier's "The Art Thrill of the Week," when it was exhibited at the 20th Annual California Water Color Society exhibition. Not garnering any award, it nevertheless caught Millier's attention as "the most profound, perhaps the only profound, job of painting in this best show the society has ever put on."

He painted in Los Angeles and its environs. Favorite spots were Echo Park and Silver Lake near his home on Allesandro Street. He traveled to Oregon to visit his artist friend John Dominique (b. 1893). In November 1940 a one-person exhibition of his work - oil paintings, watercolors, pastels, and prints - was held at Scripps College in Claremont.

Throughout the 1940s he continued to participate in local exhibitions. In 1945 he spent several months in the East - in Rhode Island, Massachusetts, and Connecticut, living with his daughter Inez and her husband. Paintings from that trip were included in a one-person exhibition at the Pasadena Art Institute in September and October 1948.

He made the first of four trips to his native Sweden in 1951, going again the following year and in 1962 and 1968. His enjoyment at being in his homeland was evident in his letters to his children. "â¦I was very glad to be back in beautiful Varmland again. Since coming back I have painted every day, two good ones from my Norway tour. I have done a great amount of work here in Sweden, more than anyone can realizeâ¦"

In 1957 he went to Japan where his daughter Betty was living with her family. He spent six months during which he also traveled to Hong Kong, Thailand, Wake Island, and Hawaii. Japan made a lasting impression on him, and he would recall imagery from that trip in works that he made on his return from California. The following spring he had a one-person show at Mount St. Mary's College in Westwood, in which he exhibited works from his travels in the Far East.
Â
Aldrin found that these one-person shows enabled him to reflect on his work. He remarked that the subject matter in all of his painting since the very beginning was secondary to the role of color, of "the feeling of light being enclosed by color." He remarked that if one lingered near the paintings, they left "a lasting impression in the consciousness."
Â
By the 1960s he painted less directly from nature and more from past experience and imagination. He remarked that he was putting more intellect into his work, not just the emotional impression he would get from working out of doors. But the outdoors would "bring fresh colors, a mood and, if you are sensitive, a poem and originality." Aldrin continued to exhibit and received awards for his work throughout the 1960s. In July 1961 he was awarded the purchase prize for painting at the California State Fair.
Â
Never wishing to cease in his aspirations, Aldrin continued to work even when he was hospitalized at the Veteran's Administration Hospital in San Fernando for long periods during 1967 and 1968. He was no longer interested in exhibiting his work, turning down two galleries' offers to do so. He lacked energy and could no longer see the purpose. Fortunately he regained his health enough to enable him to make one last trip to Sweden in 1968. Continuing to explore new possibilities in his art, in 1969, the year before his death, he began to work in acrylic, finding it to be a "marvelous medium in which you can get any color effect you wish."
-Janet Blake

Your current search criteria is: Artist is "Anders Aldrin".